In 1953, a group of believers gathered together in an old World War II Barracks building, and with a vision from God, they became, “Owentown Baptist Mission”. As with many “missions”, she had a mother church….”First Baptist Church of Winona”. Although the barracks building was their first “home”, eventually they moved into a building owned by Owen’s Development Company. This was their place of worship until moving into the new church building.

In October of 1954, “Owentown Baptist Mission” became “First Baptist Church of Owentown”. The first pastor was Dolton Cooper and was called on October 15, 1954. Rev. Elwood Dozier was called as the next pastor on September 28, 1955. Thirty-six charter members signed on October 13, 1954, with the membership growing to forty-seven by the end of December of that same year. The first two deacons were Curtis Marsh, Jr. and Roy Soape.

On February 27, 1955, it was approved to purchase two lots to build a church on for the amount of five hundred dollars each. This is the present location of the church today. It has been reported that the total cost of the original building was Seven Thousand Dollars.

The congregation of First Baptist Church of Owentown moved into their new building on Easter Sunday, March 29, 1959. A dedication service was held on Sunday, June 14, 1959 with Rev. M.O. Davis as their pastor.

On Sunday, June 17, 2001, just forty-two years and three days later, members, family and friends, gathered at First Baptist Church of Owentown for another dedication service. That being in honor of the newly remodeled sanctuary. “To God be the Glory” was the theme of the day. Truly God does have His hand on this place…..and now………...The Vision Continues…. 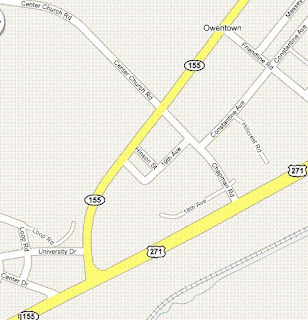 From Tyler, Travel North East on Texas State Highway 271, then:
Turn LEFT on the First Road on the left past Hwy 155 turn off. "CR 334"
Then turn RIGHT on the First street on the right “Constantin Ave”
Go past a row of houses...church is on the right side of the road!!

Home
Subscribe to: Posts (Atom)
Trust in the Lord with all your heart and lean not on your own understanding; In all your ways acknowledge Him, and He will make your paths straight. Proverbs 3:5-6

We believe that there is one God, eternally existent in three persons: Father, Son, and Holy Spirit.
Deuteronomy 6:4; Hebrews 1:3;
Acts 5:3,4

We believe that repentance and faith in the precious blood of Christ is the only means of being cleansed from sin.
Acts 16:30-31; 1 John 1:7-10